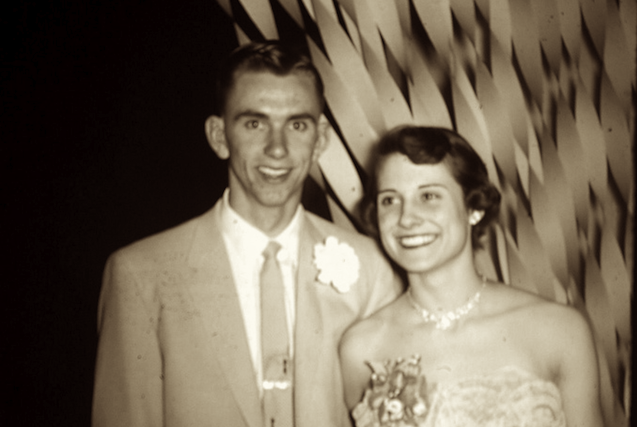 Twenty years ago Michael Fromaz and Laura Croe were preparing for their high school prom. They were eighteen, had been together for four years and they had their whole lives ahead of them. However, unlike every other student they were not looking forward to the prom, as prom was to be the last day of their relationship.

Michael Fromaz was moving with his family to Australia the day after prom and Laura had secured a job as an assistant at Ruth’s Frock Shop. So as they danced their last dance, tears streaked the couple’s cheeks… They thought they would never dance together again. The couple kept in contact for a year but eventually it ceased. Three years later Michael went looking for the girl who had stolen his heart but was unable to find her. Laura’s family had moved out of Hill Valley and she was no longer working at Ruth’s Frock Shop. Eventually Michael gave up on his search and started a new life.

Meanwhile Laura was living in Los Angeles with her new husband, Derek and was two months pregnant. Laura went on to have three children with Derek and was happily married until a year ago Derek had a terrible accident and died. In a bid to re-root herself, Laura moved with her children back to Hill Valley and when she was asked to help with the fair she agreed.

Michael was still in Australia when he received a letter from an old classmate suggesting he returned to Hill Valley for the Hill Valley Fair and he booked his return that afternoon. Laura was in the middle of decorating the High School Hall when she felt a tap on her shoulder. “I was really annoyed actually,” Laura told the Hill Valley Telegraph. “I had nearly managed to reach the hook on the wall when I felt a tap on my shoulder and nearly fell but then I saw who it was and I just…” Laura’s eyes watered as she relayed her emotions. “I just, I’d been thinking about him for the last twenty years. I never forgot him.”

“When I saw her there, I just couldn’t help myself. I wanted to just grab her and kiss her and never let her go,” Michael said. “So much time had passed but she was still my Laura.” The high school sweethearts are very looking forward to dancing together once again at prom and are planning on getting married in a months time.

“Once I saw her I knew. I knew I should never have left her. I realised she was the girl I had always wanted, always needed and the one I couldn’t live without.”