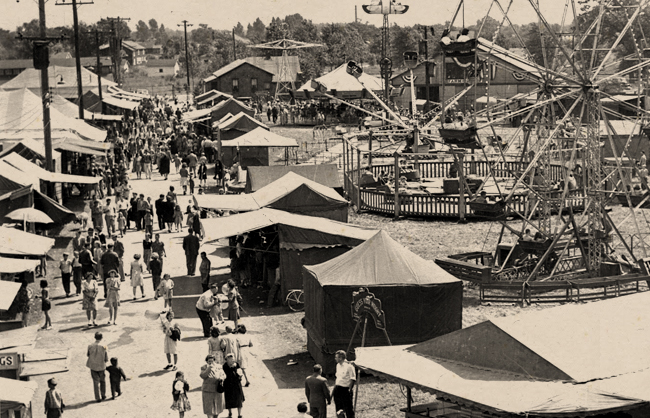 “Prepare your best smiles and clean up your yard,” Mayor Red Thomas advises, as the biggest fair in the history of Hill Valley looms ever closer.

In recent days preparations have begun to transform our sleepy farming town, Hill Valley, into a setting capable of welcoming 20,000 visitors.  In a previously unprecedented turn of events our town’s annual fair appears to have taken on a life of it’s own, visitors from far and wide are planning on attending and Mayor Thomas wants to make sure we are all prepared.

“Hill Valley’s Fair has been notorious amongst residents for decades but never before has it received such hype from the rest of the state,” Mayor Red Thomas told a Hill Valley Telegraph reporter.

The massive crowd will be in part due to the Town Squares iconic Clock Tower’s 70th anniversary.  “The Clock Tower is part of our history, it’s part of who we are as Hill Valley locals.  Of course people want to celebrate,” Mary Thompson a resident of the town told the Hill Valley Telegraph.

The upcoming elections mean that mayoral candidates have a chance to demonstrate their plans to get our little town on the map. Current Mayor Red Thomas has declared his intention to make this the “biggest fair Hill Valley has ever seen”, setting up the town’s first ever tourism program and working with the local community on a number of in-store events.

Throughout the day shops and residents from across town will be throwing open their doors to visitors. Curious Californians from all over the state are expected to attend the celebrations, which will culminate in an “Enchantment-Under-the-Sea” themed parade. Activities are expected to start mid-afternoon, with Otis Peabody, the area’s most prominent landowner (and keen pine farmer) announcing plans to open the Twin Pines ranch to all guests of the fair. The Peabody family is known for their rare and much-anticipated parties that usually revolve around tractor demonstrations, livestock beauty awards, and live music. The main draw of the fair however, will certainly be the parade, which will march through town towards Courthouse Square and the beloved clock tower.

The Square’s shops will be opening their shutters to thousands of customers, which should soon become a regular occurrence due to the large number of new developments planned for the area. Still, while Hill Valley welcomes new infrastructure on a massive scale, locals are also helping to support long-standing shops. The grand re-opening of old favorite the Hill Valley Stores from July 11th, which includes outlets of Ruth’s Frock Shop and Roys Records, is a good omen for the town’s close-knit community. The store will be open to shoppers Thursday through Sunday. For more information on the store’s opening hours, the fair and parade or Hill Valley in general, visitors are advised to check ‘The Department of Social Services noticeboard’.